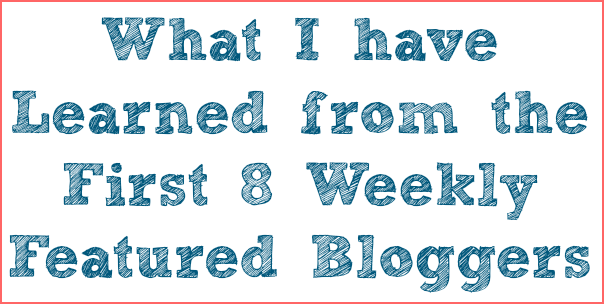 Hey there! If you’ve been following along, you know that each Monday, for the past 8 weeks, I have been featuring a successful blogger here. I started this feature to try and help motivate others who are trying to find success in the world of blogging. It’s been nothing short of amazing and I certainly plan on keeping it going.

This week though, I wanted to look back at the first 8 features and highlight some of my favorite things.

When I started this, I hoped that the answers from these bloggers would closely match what I have been “preaching” on this blog, and I got my wish. Just about every single answer from all 8 bloggers is right in line with my philosophy of blogging.

I have always said blogging isn’t easy. I also say that if you’re only in it for the money, it’s probably not going to work. The reason for this is that it will most likely take quite a while to see financial gain from blogging. 7 out of the 8 bloggers said it took them at least 6 months before earning their first $100 from their blog. This means that if you don’t LOVE what you’re doing, you are probably going to quit.
—————————————————————————————————————————————-
Hard Work
One of my favorite quotes that came from these (there are a LOT) is from Shanna, who said, “I had to realize that if I was going to grow, nobody out there was going to make it happen for me. I had to put in the time and effort.” There are a few reasons why I love this quote. Some people seem to think that blogging is easy, and “my content will sell itself” so I don’t have to promote. Well, the chances of that happening are one in ten million. Yes yes, on the occasion, a blog will go viral and the owner won’t have to do much to “get huge”, but that is rare. Just as in the “real world” where you’re not going to just show up for a management job, do about an hour of work and wait for someone to promote you, you can’t spend an hour a day blogging and expect to get results. You have to be out there, in the trenches selling yourself and your blog. Anyone who thinks otherwise is most likely just wasting their time.

My favorite quote from Rachel is one of the most simple, yet ignored ideas: “Treat it like a business.” This one is so great! I mean, if we can all agree that you are trying to make money from your blog, why wouldn’t you treat it like a business? It’s crazy to me to see people asking me how to turn a blog into a full time income who have such a casual approach to their blog. From day one, you have to be constantly thinking about where you want your blog to be in one year, three years, five years and beyond. You’ve got to be willing to sacrifice some fun time because you need to get a post done. As Josie says, “It’s not a ‘sit back and watch the benefits’ type of thing. You must work hard at establishing a following.”

Several of the bloggers features worked on their blogs for 40+ hours a week, with a couple of them working over 60 hours a week. I’ve always said I’d rather work 60 hours a week from home or wherever I want than work 40 at a desk somewhere. I would guess a lot of you agree with me on that one.
—————————————————————————————————————————————-
Making Money
In the very first feature, Josie has a really good piece of advice. “Don’t put all of your eggs in one basket.” This is a very important idea. Just because the money is nice from one source, doesn’t mean you should stop looking at other ways to earn money from your blog. You never know when that one source is going to go away and it’s important to have other options and other streams of income. This point is driven home by Katie, who mentioned “to diversify” as a goal she has for her blog.

We were reminded of the value of a loyal reader by Kilee and McKel, who said this of sponsored posts: “I don’t want to jeopardize my relationship with my readers because I’m getting paid by a company to write.” – Kilee and “I would never engage in a sponsored post just because I was paid to do so” – McKel. While I don’t have a problem with sponsored posts in some cases, other times it is painfully obvious that a blogger simply took an opportunity because it was paid. To me, that’s a bad road to go down. We turn down sponsored post opportunities almost weekly on my wife’s blog because they don’t fit with what we’re trying to do there. Sometimes, you have to look at the big picture and pass up the $150 that’s right in front of your face. Unfortunately, some bloggers can’t resist and it leads to their blog’s ultimate demise.

Just from these features, we can see there are a lot of ways that successful bloggers make money. Among the top revenue sources listed are: AdSense, Glam ads, Coupons.com, Amazon, Advertising.com ads and even freelance writing gigs. Some of these are obviously going to work better in certain niches, but you get the idea – there’s going to be a way to monetize your blog once you build a readership.
—————————————————————————————————————————————-
Concerns
Even “big bloggers” have concerns. We explored some of them in the features.

Rachel is in the deal blogging niche and is unsure of its future as the economy improves and less people are trying to pinch pennies. As she says, “It’s a field in which you constantly have to be evolving and improving.”

Jessica is wary of Google’s ever-changing algorithm and social media (Facebook) changes that seem to be unfavoring toward businesses. While I think it’s good to realize that things can change at any time, I like Jessica’s attitude toward it – “I can’t control it so I don’t waste my time worrying.”

Shanna is concerned that her readers will think she is “too old to blog about fashion”. I’m sure her readers would be the first to tell her that she has nothing to worry about!

Josie takes a different approach to blogging concerns – “I feel secure in knowing that I have a good relationship with my readers, that they will always be there as long as I blog.” That’s what being likable and building a readership does. Josie feels that as long as she keeps blogging, her readers will follow, even if she shifts her focus a bit. That’s the power of building a solid readership.

—————————————————————————————————————————————-
Being Awesome
Katie taught us how to deal with haters by adopting an awesome mindset: “Am I going to expend energy playing defense against the 1% or building awesome for the other 99%?” If you let the haters and mean spirited people change the way you run your blog, or if you take time out of your day to try and fight fire with fire, you’re taking away from the great content that you are providing the readers of your blog.

Another aspect of blogging that I’m glad we heard about was the fact that most non-bloggers just don’t get it. As Jessica says, “Get a support team. You need BLOGGER friends who understand what you do and support you.” I think this idea is so important. You want someone, or a few people who you can bounce ideas off of, who you can share tips with and who can support you. Again, this is one of the biggest complaints I have heard from bloggers – “nobody gets what I do”. That may be true to a point, but there are a lot of people who DO understand, you just have to make connections and build a little support system. As a matter of fact, Rachel even said the one thing she wished she knew when she started blogging was this: “That there was a whole community of support and wealth of knowledge out there that I never knew existed.” You just gotta look around!
—————————————————————————————————————————————-
And I’ll wrap this up with a quote from GiGi to get you motivated: “The sooner you start, the sooner you will be rewarded for your hard work!” So if you don’t have a blog, start one! And if you do have one, it’s time to set some new goals and get re-motivated!
—————————————————————————————————————————————-
I hope you have enjoyed the first 8 features and I sure hope you’ll stay tuned for the next one! As I said at the beginning, I fully plan on continuing these as long as I can find enough awesome and willing bloggers to participate! I want to reiterate that I am not trying to be discouraging with these features. What’s discouraging is starting a blog with high hopes and an unrealistic set of expectations. It sounds cliche, but if it were really truly that easy, everyone would be doing it. These features are supposed to introduce you to bloggers who have put in the work and who are successful in hopes that you will learn and find some motivation to make your own blog successful.

The truth is, it can be done. Most of all, it takes hard work, laser focus and dedication. If you can create a steady income stream from a blog, you’re doing something very good. If you can replace a “real job’s” income and actually quit said job, you are doing something amazing (and terrifying).

Until the next feature…

As of December 2009, the FTC requires all Blogs generating any source of income to have an official … END_OF_DOCUMENT_TOKEN_TO_BE_REPLACED