Ok, I admit, I’m trying to make waves with this title, but it’s 100% true. I am tired of seeing people in “authoritative” positions, and “gurus” talking about how Facebook is “dead” and is a waste of time.

Here’s the thing – Facebook is NOT dead. It’s not going anywhere for quite some time. Now, this isn’t to say you should ignore newer and possibly more productive social media platforms like Pinterest and Instagram, but what I’m saying is that you shouldn’t ignore Facebook either.

Facebook is still driving incredible amounts of traffic to blogs and websites to this day.

One example I have is Katie from Kroger Krazy, who I featured here a while back. She is arguably the most successful blogger who I have featured and listed her #1 traffic source as Facebook. I’ve seen it with my own eyes. She has good, unique, shareable content that increases her FB reach a lot. People share her posts in their own timelines and tag their friends in her posts so that they see it.

You see, if you have good content that real people want to share on their own timeline, Facebook’s algorithm isn’t going to slow you down much.

Similar to the changes that Google makes to SEO, Facebook’s changes will have less of an impact on people doing the right thing from day one.

According to a recent Mashable article, “we’re seeing less like-baiting and meme photos in news feeds”. This means that people trying to “game” the system by posting memes of unrelated topics in hopes of going viral or people trying to boost reach on a post by asking people to vote using the “like” or “share” button are going to be negatively affected. Like this: 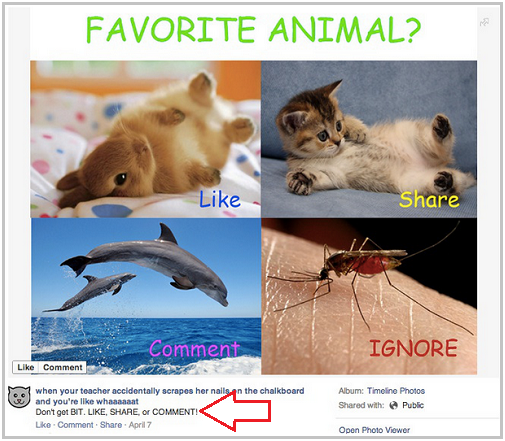 Facebook is also showing more posts for pages who have a higher percentage of engagement. This means if you built your fan count using methods such as fiverr, buying likes, or giveaway entries, you are going to suffer. 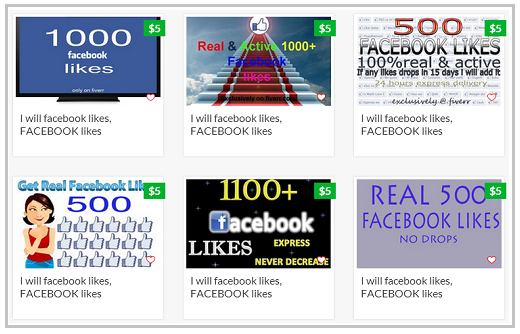 Those are not engaged followers and won’t be “liking” or sharing your content. Subsequently, this will bring your total reach way down and people who truly do “like” your page will not be shown your content. Again, people doing the right thing from day one will not suffer due to this.

Just like when Google came down on people trying to game the SERPs by linking back to their site using only keywords, Facebook is trying to improve the quality of what people see by taking out the “gamers”. This is one of the reasons why people like Katie are still successful. Her Facebook posts are informative, unique and highly shareable.

I’m not saying there is anything wrong with trying to build Facebook pages or do SEO or any of that, I’m just saying you can’t be surprised when companies try to weed out people who are “gaming” the system.

That being said, even if Facebook is only showing your updates to 4% of your 5,000 fans, that’s 200 people. How long does it take to post a status update with a link on your page? 10 seconds? I don’t know if very many other places on the net where you can reach 200 targeted people for just a couple of seconds of work.

I realize that study after study is coming out where teenagers are saying they are not on Facebook anymore. Well, I have a question for you – is your target audience teenagers? If it is, they by all means, listen to those studies. The truth is, I’d have a hard time finding any 22-35 year old saying that they have not been on Facebook in any given day.

Facebook is very much alive and kicking, and if I ever met Mark Zuckerberg, I’d thank him for the free traffic to my website.

So what should your Facebook strategy be going forward? Post high quality, engaging content and encourage interaction without baiting it. Post on a regular basis but not too often. DO NOT buy “likes” or engagement. None of this will guarantee results, but it will give you the best chance at having a sustainable Facebook strategy.

As of December 2009, the FTC requires all Blogs generating any source of income to have an official … END_OF_DOCUMENT_TOKEN_TO_BE_REPLACED